Updating this website I just want to mention how happy I was to receive the Danish Film Academy award for best music score 2015! This prize was also given to the Danish composer Tina Dico who wrote most of the songs for the score to the film SOMEONE YOU LOVE by Pernille Fisher Christensen. I wrote the song ‘So Now I Ask You’, recorded a lot of Mikael Persbrandt’s vocal tracks and worked as a vocal coach on set while filming all music scenes.

It was a fun and interesting challenge. Most of all I was struck by the devotion, discipline and group effort  on set from everyone involved. I am very thankful for this experience.

…btw. a very special thing happened at the award show. Film director Lars von Trier suddenly entered the room. He is known to be a very rare guest at these kind of events. That night he won 8 awards for (the masterpiece) Nymphomaniac Director’s Cut and he actually even gave a speech! As I am a big fan of his I was very moved by his presence and words of artistic bravery. 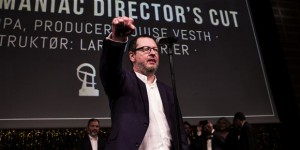